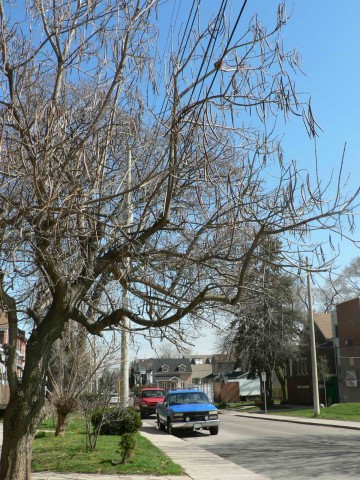 A person living in this house once told us that this particular tree is very ancient and has been here since time began. Some fancy tree folks tell us that Catalpa are not native to this area at all, and properly belong further south.

These are two different kinds of truth, and we would rather hold them both in our hearts at once than set them in competition with eachother. But we might also add Catalpa to Toblers and Black Locusts in the group of trees that are here because of human intervention, but now aren’t going anywhere and probably would have gotten here sooner or later anyway. How old do you think this tree is?

This tree is Catalpa Speciosa, the northernmost representative of the tropical Catalpa family. Come back by this corner next month and take a look at the leaves – most tree species native to temperate climates have toothed edged leaves, while most tropical trees have smooth edges. We wonder why that is, but it does help the Catalpa distinguish itself in Hamilton’s urban canopy.

For now though, see all those beans hanging in the branches? See if you can’t get ahold of one (careful not to hurt the tree!) and split it open. What do you see inside?

In winter, you can watch bright red Cardinals hang from the branches and split the pods open, drop the seeds to the ground, then dart down for a feast. And if you see bees and wasps hanging around a Catalpa during hive building season, they might be collecting fungicidal and bactericidal chemicals from the tree to protect their homes.

How would you describe Catalpa’s bark? Can you spot any buds yet on those branches that seem to reach down to you?