On the surface, we see only the beautiful, strangely pitted and patterened limestone outcrops known as karren, and the occasional grassy, bowl-shape in the ground — a sinkhole. But from this, we can imagine the water moving through the rock below, and know that we are in a very special sort of landscape: a karst.

We make our way out to the suburbs at Upper Mount Albion Rd and Rymal Rd to go visit Hamilton’s newest conservation area, called the Eramosa Karst. Rita, of the Friends of the Eramosa Karst (FEK), and her little dog Fidel meet us there. Rita’s been spending lots of time exploring this piece of land here over the last several years, and she has kindly offered to share her knowledge and experience with us, to introduce us to the karst. Karst, she tells us, is all about water acting on rock – the distinctive landscape and underground features are the result of rock being dissolved and swept away by water over many years.

She takes us over to a big map of the site and explains that the current parkland was part of a much larger area that was deemed to be of scientific interest. But in time, most of that was sold to become subdivisions and malls by the Ontario Realty Corporation (ORC), which deals with property owned by the province. The Eramosa Karst Conservation Area was created because the top soil was thin here, under three metres deep. Developers would have needed to blast into rock to create the foundations of buildings, which on karst terrain would likely have caused a cave-in. So the bureaucrats drew a line around the area where the topsoil was less than three metres deep and made a park out of it – evidence of this process can be seen in the oddly shaped property line of the park’s eastern edge.

That eastern edge, Rita tells us, borders currently on abandonned farm fields that have been renaturalizing for many years. Currently, the FEK is working to have that land added to the current conservation area.

As we approach the forest along the right-hand trail from the parking lot, there are outcroppings of karren all around. Most of the stone is in its natural state, but some of it has clearly been cut – Rita explains that the shallow top-soil here was ideal for early settlers trying to get at stone for their dwellings. It’s ironic that the condition that today has caused this land to be preserved in the past made it desireable. She tells us that the only mandate of the ORC is to ‘maximize the value of its holdings’. To them, the word ‘value’ refers only to money, and this land was protected only once it was deemed to have no financial value.

But how do we define value? Rita poses us this question as we enter the forest, and it sticks in our minds as she shows us the land she has committed to defending.

We follow the line of the Eramosa escarpment, which is a smaller escarpment about two metres high that runs just south of the Niagara escarpment. We pass by a deep sinkhole where the motion of water through the karst is dragging down the forest floor, and Rita tells us that it wasn’t there at all when she first started walking here. She takes us to where a spring emerges from the base of the escarpment – it runs all year long, proof of its origins in the deep earth where the temperature doesn’t vary. In the melt season, Pottruff Cave up beyond the escarpment fills up and overflows in a joyful spring cascade down the slope to join with the spring here.

Rita excitedly describes how the underground caves fill and overflow. Once water has filtered through the soil down into the karst, it moves very quickly, filling the caves and seeking any possible path, pouring in and out of the subterranean, water-carved mazes. Rita explains to us that, since water moves so rapidly through the karst, the filtering action of healthy soil in the lands nearby is essential for maintaining and increasing the health of this land. The hundreds of plant and animals species living here – including two species of owl that were thought to be locally extinct – need the land around this conservation area to filter the water that passes through here on its way into the great lakes.

And with that, Rita and Fidel return towards the parking lot, while we explore further. On the edge between the meadow and forest, we stop to pick apart some coyote poop and examine the bones of a rabbit. As we we follow the Nexus creek upstream into the meadows, we can see the subdivisions close on all sides of us. It lead us to the mouth of the Nexus Cave, where we crawl down under ground. Here, in a little refuge out of sight of suburbia, we relax, and think about what we’ve learned.

Last month, we reflected on change, and about how knowing the history of the colonization of land can help us to better understand its present. When we protect land, we don’t just want to simply preserve it as it is now – we want to encourage this land back towards the peak diversity and health it knew before colonization. Two months ago, we thought about how the conservation approach is inadequate, because the health of a given site is completely enmeshed with the health of the land around it.

How do we define value? When early settlers built their homes nearby, they cleared the land in order to demonstrate their ownership over it. If the capitalist system values you, it means you are a resource. If if it calls you a resource, it means that it intends to kill you and sell your parts. Can we reject the thinking of colonizers and understand the land a different way?

Along with the owls, two other species of birds that have returned to this area: the Lagerhead Shrike and the Northern Shrike. Shrikes are attracted to this area because of the dense thickets of Hawthorn trees. They love to catch small rodents, then hang them from the sharp spikes of the Hawthorn to strip their flesh with curved beaks. 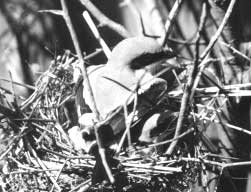 In this region, Hawthorns have an unparalleled ability to reclaim land where the topsoil has been cleared — in this case, scoured away by the last glaciers. If it’s possible to recover from the weight of a glacier, then there’s hope for even the saddest lands. The Hawthorn’s strong roots are adapted to find holds in thin, nutrient-poor soils. Once the tree is established, it forms a damp pocket where its trunk meets the soil. This pocket catches the flying seeds of the Sugar Maple and holds them in the renewed soil at its base. As the Maple grows, the Hawthorn dies and gives the sapling protection; and interestingly, the Hawthorn’s thorns become even stronger in death. By nurturing Maple trees, Hawthorns can be thought of as the mothers of mature forests.

The succession of growth on the land teaches us respect for future generations. All life is connected, across property lines and across species. The way colonizers think is deeply linked to the way they use land: the histories of the forests are the histories of colonization. Values based on property and profit only encourage death; they are not in line with a forest surviving. In order to reshape our values to include life, we must seek to understand the complex interdependancies that will reform as the land heals and biodiversity increases. If we want to protect areas like the land around the Eramosa Karst, we must resist the logic of colonialism and capitalism and find new ways of understanding value.