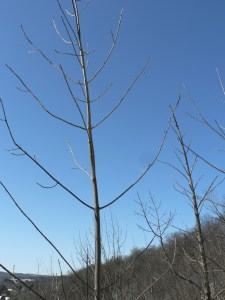 The remaining wild spaces along the Spencer Creek show the marks of a patchwork history of land management and restoration practices that continue to affect the health of everyone in the watershed today. To gain a better understanding of the Spencer Creek, we begin in the headwaters at…

The Beverly Swamp. Looking South from a hill near Hwy 97 and Brock Rd in Flamborough, the swamplands seem a vast, dark patch of stillness on a landscape that is otherwise all fields and farms. It is one of the largest forested wetlands remaining in Southern Ontario, where more than 90% of the original wetlands have been destroyed.

Among those trees below us, the water from Valens reservoir joins with Fletcher Creek, flowing from the Paris-Galt moraine, to form the main branch of the Spencer Creek. In most of western Hamilton, a drop of rain that falls will end up in the Spencer Creek, meaning that this whole area is part of the Spencer Creek watershed. It is one of the most important water systems around here, and we have made it our goal to get to know it better.

We follow the LaFarge trail South, and when we descen into the swamp, we find the ground and water in it is frozen. A week later, we would return and realize how lucky we were, when, after heavy rains and with Spring thaw in full effect, any step could be the one that sends you up to your knee in mud. But the coming Spring will also reveal many wonders unique to a swamp that will draw us back again, like Sphagnum Moss and Pitcher Plants.

Today though, when we spot a tall Tamarack from the trail, we are happy to run out through the frozen swamp towards it.

Tamaracks are coniferous trees that love wet soil and shed all their needles each fall, contributing to an acidic soil environment. They kind of just look like dead spruce in this season, but the large nubs on their branches where their needles grow gives them away in silhouette. We decide to set our packs down by this tree while we explore the depths of the swamp, but we don’t get more than a few steps before we notice the other trees around us and are overcome with curiosity.

Many of the trees here seem unfamiliar, so we stop to look at them more carefully. To identify the trees and plants of a site is to begin to learn the language of that place, and it is one of the first things we try to do when exploring a new place. We call it forest literacy.

One tree we see has pale, scaly bark, thick twigs, and clusters of dried seeds still hanging on into the winter. Looking up at the branches against the blue sky, we recognize a familiar pattern of paired, branching in the twigs, the same as we see in Ash trees – it’s a Red Ash!

Another tree has deeply furrowed bark and fine, paired twigs, and we soon realize it is a White Elm. Both Red Ash and White Elm are trees we often see growing in ditches and on other disturbed sites, where they frequently assume a gnarled, shrubby form. But here they grow tall and graceful, forming a large part of the canopy, along with Silver Maple, White Cedar, and Aspen.

We find some Coyote tracks and let them be our guide, following them over the twisting landscape of hills and depressions. We observe that White Cedar and Aspens prefer to grow on the highest places, along the edges of the main, raised trail. Red Ash takes the wettest places, often growing right in the water, with White Elm and Silver maple taking the spots that are just a little less wet. By spending time noticing small details of these trees’ form and habitat, we are soon able to identify them even in peripheral vision, allowing us to focus on the tracks we’re following.

Soon, the Coyote tracks intersect some Deer tracks that are more recent, and we switch to following those instead. Spending time wandering along an animal’s trail and creating a story of who was here and what they were doing can be a fun game for developing forest literacy. The Deer lead us uphill, into a slightly different swamp community. Before, in the swampiest spots, there was little undergrowth, but now we’re in an area with a thick tangled understory of Dogwoods and other shrubs. The canopy is dominated by White Cedar, a favourite spring snack for deer, with a thick tangled. But as we continue higher, the forest becomes entirely White Cedar.

Normally, entering a stand of Cedars is one of our favourite things, but here, they grow densely, almost on top of each other. The experience is a little disturbing. They must have been planted to be this way, so why were they planted? We recall that White Cedar is often used in restoration projects because it is a cheap and fast-growing way to quickly stabilize the soil.

Back on the main trail, we find a signboard that explains that 60% of the Beverly Swamp is privately owned, and that it depends on “good land stewardship” for its health. The Cedar monocultures are examples of hasty stewardship, within a logic that land must be actively managed to have value, whether it be to a farmer or to a granting body approving a restoration project.

In the past, the Beverly Swamp was much larger than it is today, even extending far enough to nourish the waters of the Grand River. Stewardship programs, like the one covering the Beverly Swamp area, are clearly good steps to be taking to protect lands and allow them to recover. But these efforts are insufficient if we step back and think about the scale of the threats to our watershed. They also play into the common story that only property owners and people with access to money can participate in addressing problems that we all face. Why should we trust landowners, governments, and corporations to determine the health of the land water for us?

Building a personal knowledge of our watershed and the factors that influence its health is an important step we can all take towards its defense. The better we know the land, the less likely we are to be mislead by justifications for further destruction. Working towards this goal, one thing we did was spend a lot of time in libraries reading old reports about the Spencer Creek Watershed.

We found that back in the fifties, controlling the flow of water in this area to deal with the spring floods and summer droughts was the overwhelming concern. And so dams were installed, reservoirs like Valens and Christie were created, and waterways were channelized or buried, like what has been done to the Spencer Creek as it flows at last into Cootes Paradise.

But there is more to this story. These concerns about floods and droughts only began after almost all of the original forest in this watershed was destroyed. When the land is covered by forest, water moves much more slowly, filtering through the deep soil on the scale of years as a part of the watertable. From here, water enters the Spencer Creek evenly and constantly. When the forest is cleared, more water runs off the land rather than entering the watertable, lessening the base flow and causing flooding and droughts.

As we consider this story, we emerge from the wonders of the swamp world and find ourselves at the foot of a large drumlin. Drumlins are hills left behind by the retreat of the last glaciers. The huge sheets of ice left this area moving North-West, and so here, (around Safari Rd), we can see seven or eight egg-shaped hills pointing in that direction. The trail runs through a strip of wild between farmers’ fields over the top of the drumlin. From this high ground, we look South and out over the Spencer Creek Watershed. From here, we see large metal electrical towers marching towards the city, we see barns and farms and roads, and patches of trees.

The second leg of our journey along Spencer Creek will be through these lands – towards the Escarpment and over it, through Dundas to join with many other creeks, and at last into Cootes and Lake Ontario. We decide to take a break here and camp for the night, but we will continue this story soon. In the meantime, we’d love to hear your stories about the creek, and about the land around it!