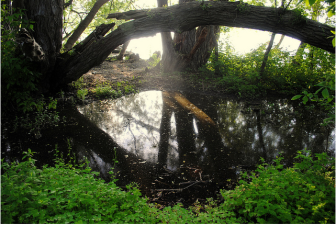 [In the series Downstream Stories]

A tall fence surrounds the old Tannery Grounds out at Orchard st and River st, but the wildflowers spill out and press close to the pavement. Cottontails scatter as we approach, and birds are greeting the dawn from the welcoming branches of a big White Oak. On the fence there are several “No Trespassing” signs, but where River st approaches the water, a well-travelled trail enters the Tannery Grounds through a deliberate gate.

There was once a tannery here that leaked its poisons into the soil for decades, and hazardous waste continued to be dumped here even after the old tannery was torn down. The popular story is that the Tannery Grounds are poisonous, unsafe, and need to somehow be dealt with.

This story keeps most people away, and it has meant that, for the past forty or fifty years, this site has been rewilding on its own. Our first steps through the gate immediately reveal the richness of what has come to be out in this forgotten corner of Kingston.

Inside the fence, we rest in the welcome shade of a dense thicket. The thicket community here is characterized by small quick-growing trees like Staghorn Sumac and Manitoba Maple. They form a canopy over the Golden Rod, Fleabane, and other wildflowers that would have been among the first plants to return to this site, stabilizing and enriching the soil until larger trees could get established.

The process by which the first species to establish themselves in a brownfield develop into a thicket is called succession, and it means a steady increase in biodiversity and health. The eager plants in this thicket represent an early succession community. They build up the soil and create habitat for the birds and mammals who bring the seed for the next stage of succession. Often times, these kinds of thickets are dismissed as valueless, “just a bunch of weeds”, when really, they are doing important front-line work in healing the most damaged of lands.

As we dig into the thicket, we find young Red Ash, Silver Maple, Red Oak and White Oak – all species that would be found in a more mature forest. We also find Hawthorns just setting fruit, Red Elderberry growing above its good friend Wild Strawberry, and a stand of enormous Black Willows leaning over the shore of the Cataraqui River. In their shade, we watch a blue heron hunt and look out across the water at a strange horizon of wind turbines.

Kingston is trying to style itself as “Canada’s Most Sustainable City”. This seems to be mostly a matter of calling the city sustainable so often that people believe it to be true. The wind turbines on the far shore mostly makes us sceptical of the city’s claims, because the city is also planning to destroy this healing forest for a new road, the Wellington st extension. We wonder why their vision of sustainability includes costly and uncertain technological fixes like wind turbines, but ignores the ability of land to heal itself.

The Tannery Grounds are huge, and there is so much life and growth around that we could easily spend all day exploring just in this one spot. But the thicket is only the first of three distinct ecosystems that make up this healing land. Just beyond the Willows, there is a fork in the trail. To the left, there is a meadow that is still dealing with the most recent disturbances to this site; to the right, there is a marsh thriving on the fill left from this land’s industrial past.

Going left towards the meadow, the thicket ends abruptly at a series of tall, dry, gravelly hills. As we scramble up them, we quickly realize that these hills are mounds of soil from other sites that were brought here to be dumped. As we climb and descend, we notice that plants like Goldenrod, St John’s Wort, and Bouncing Bet stick to the less exposed, low places between hills where water collects. But even on the scorched, compressed tops of the dump piles, we find a few brave Thistles, with their creeping underground stems, and Mullein, sinking their long tap roots down, stabilizing the soil and making way for more life.

Just beyond the dump meadow, there is a row of Sumac and Buckthorn separating it from quite a different meadow. This one is characterized by the bright yellow flowers of mustards working to clean up lead and chromium from the soil, and huge Cottonwoods, whose roots help to contain toxic groundwater. The two fawns pause to consider us before following their mother into the low shelter of the Sumac grove.

Meandering along deer trails back to the willows, we choose the other fork now towards the third ecosystem in the Tannery Grounds – the marsh. There, stands of Cattail spill out flocks of Redwing Blackbirds, and frogs leap from the gravel path to hide among their roots.

Marshes once defined much of the shores of Lake Ontario. More than two-thirds of wetlands in Southern Ontario have been destroyed. The shore here was filled in with gravel to remove the original marsh and make the shoreline straight and regular. That this particular industrial landscape has restored itself is a powerful inspiration, even as it sits between a golf course to the north and a leaking sewer plant to the south.

We sit among the Heather and watch White Water Lily flowers catch the morning sun. A group of turtles slide from a log back into the water, warned of our approach by the birds’ warning calls. The plant and animal communities here are enriching the soil and cleaning the water; this makes space for the return of the fungus and soil microbes that can break down and digest the toxins in the soil. Their actions provide the nutrients that can support even more plants and animals.

Just thirty years ago, this site was so poisonous that guard dogs suffered chemical burns on their paws. Within just a few decades though it has grown to become a model of health that more people in Kingston will hopefully take the time to explore and celebrate.

We must question the logic offered by local politicians that sustainability means looking at windmills out the window of your car while taking a newly built shortcut to the highway. The Tannery Grounds also show us that, more fundamentally, we need to ask if it is really politicians and business owners who have the best answers for dealing with the toxic messes they have created.

The Knowing the Land is Resistance Collective stopped in Kingston on July 17th for the first workshop in our Seeds of Resistance tour. We gathered with nine excellent locals at the Artel, a collective house, gallery, and social space. The struggle to defend the Tannery Grounds is just getting started, and we’ll be sure to post more news as it emerges.

11 responses to “Kingston: By the Shores of the Tannery Grounds”

Leave a Reply to Knowing the Land is Resistance Cancel reply