From the series, Trent University's Private Residence, by Holly Norris

From the sidewalk, we can peer past the thick, tangle of Raspberry and Red Osier Dogwood framing a tantilizing vision of Cattails beneath Black Willow. But it’s difficult to find a clear passage into this cool slice of green, and so we’re left fumbling along the sidewalk under the hot sun, adjacent the sun-scorched grass of Trent’s lawns.

This wetland is a hotly contested space in Peterborough, as it is slated to become the site of a privately owned residence for Trent students. We are here to explore this site, to appreciate the health and value that it has as a healing wetland.

While searching for a path in, we reflect on all the work that has been done to oppose the university’s scheme to sign a ninety-nine year lease of this land to a private company that will build a residence here. The students at Trent are overwhelmingly opposed to this project – they see it as a step towards increased privatization and fragmentation of their education. This new residence will not pay into the university, and will not be part of the college system that currently supports Trent students as in their studies. The project was recently approved by the Peterborough city council.

However, on the websites and articles that describe these struggles, we were lucky to find even one sentence about the value of this site as a wild space, as a wetland somehow thriving between a busy road and a neighbourhood. And that one sentence would usually focus only on the presence of endangered species that may be present, but not mentioning all the other signs of health that do not have special legal status but are clear to anyone who looks.

Just north of the turnoff to the university, we find a small trail dropping down into the thicket, and we gratefully slip into the shade of Sumacs and Red Ash there. Standing beneath the shade of even a single layer of leaves can be such a relief from the harsh, exposed sidewalk. We pause to rest here for a moment, before realizing that we are standing in a patch of poison ivy! Even though we’ve found a trail into the site, this land, and the issues around it, seem to be difficult to access thus far.

But the trail leads us out into a meadow, and the narrow footpath soon joins with a wide, rutted path used by All-Terrain Vehicles (ATVs). The chest-high expanse of Goldenrod, Thistle, Fleabane, and Milkweed sway gently in the wind, and many colourful insects flit between them. This meadow rises with the slope of the land, and we climb from shade to shade – now beneath a Black Walnut tree, now a Red Ash, now a stand of White Poplar – as we follow the ATV trail uphill.

As the trail loops south, with the waters of the wetland tantalizingly below us now – we pass the huge backyards of massive homes. The huge footprint of the people who live in these homes is obvious all around us. There are dumpings of yard waste three feet high, tangles of garbage and discarded furniture, and of course the ATV trails themselves end at these yards. A bit further, we come to a huge satellite dish, overgrown with vines, standing like a confused metal mushroom beneath a tall Basswood tree. We’re in a loop cut into the thicket so that the ATV’s can turn around, and from this mushroom we notice a tall fence surrounding a tennis court, the healing forest pressing close around it. 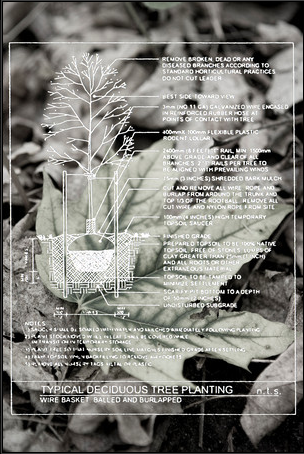 From the series, Trent University's Private Residence, by Holly Norris

The residents of the wealthy neighbourhood here, through the University Heights Neighbourhood Association, are another group that oppose the development of the private residence. They oppose it for many of the same reasons that the students do, although with perhaps more of an emphasis on protecting the land, at least on the surface. But is it that these wealthy neighbours care about the health of the land, or is it that they are interested in maintaining their very privileged access to it? For some of them, this land is literally their backyards, and they have been able to do as they please, whether that means dumping, building tennis courts, or driving around on recreational vehicles.

In any struggle, different parties will have different interests. Around the issue of building a private residence on this site, students and those who care about the health of the land are allied with the rich people living above. But this alliance can rapidly change – people primarily interested in preserving their privilege are much more likely to accept concessions from politicians and developers. This not only takes them out of the struggle, but may cause them to view continued resistance as a threat.

At first, the only trails from here that we can find lead up into these backyards, but a second look reveals a faint Deer trail going straight downhill. Moving slowly and carefully, we follow the track down through the thicket, and see the wetland open out before us. On the edge of these two communities, a large Rabbit warren sends out tiny trails every which way, and nearby, egg-shaped depressions in the Goldenrod show us where the Deer recently spent the night.

The ground drops lower and the Red Ash grow larger, joined by young Willows and Cottonwoods as Cattails and Reeds replace the meadow flowers. We have finally found our way into the heart of this site and with it clarity on the issue of the proposed development.

The health and value of this site are self-evident, the rich vital scent of the soil obvious with each breath. Now, in coming to know this place for ourselves, we don’t need any of the complex justifications or legalistic arguments against the private residence. This is a wetland! One of the very last of the remaining wetlands in Southern Ontario. We can simply say don’t fuck with it and stand strong in that.

The first step in defending a piece of land is to get to know it and understand its health for ourselves. Without this personal connection, our good intentions can be mislead by complicated studies and jargon that seek to justify further destruction. We find a massive Ash tree, the seed-mother for this area. Sitting in the cool of its shade, we recall that within a watershed, all places are profoundly interconnected. The health and healing of even a small wetland like this benefits us all.

For more information about the struggle in Peterborough against Trent University’s private residence, visit nprt.ca

All photos by Holly Norris

This article is the third in the series Downstream Stories: towards a watershed-scale resistance — follow the link for the others!