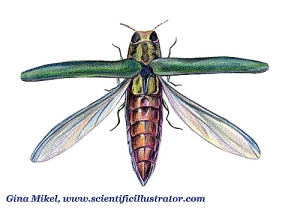 It was here in Comber, a town in Essex county, which makes up the southern most tip of Ontario, that we first noticed it. We’ve stopped in a sports field to watch the sunset. What we see though, silhouetted against the sky’s red glow, is a long line of dead Ash trees. Ever since the Emerald Ash Borer first appeared in Hamilton, we have been hearing stories about its effect on forests further south. But this is our first time seeing a whole stand of Ashes killed by the exotic beetle.

Now we sit with the dead trees as it gets dark, reflecting with concern on the forests we love back home. Last year, we started spotting the irridescent green beetles in Cootes Paradise. This year, we can’t go for a walk there without passing one. The White Ashes that grow on those hills, with their tall diamond-bark trunks and elegant symmetric branches, are old familiar forest friends – it’s heartbreaking to imagine the trails without them.

This is far from the first invasive outbreak to devastate a prominent tree species in this area; Chestnut Blight and Dutch Elm Disease are two others of note. In both of those cases, government and conservationists embarked on hugely expensive campaigns to ‘save’ the trees, featuring massive cullins of infected trees through various methods. These strategies failed to prevent the infestation from spreading, and it’s important to recall that no similar strategies have ever succeeded. In the case of the Chestnut Blight, we now understand that this practice actually reduced the Chestnut’s capacity to develop resistance to the disease.

US Forest Service trying to poison the Spruce Budworm in 1960

As we sit with these Ashes here in Comber though, we begin to notice that most of the dead trees are sprouting new growth from the roots. Around them, many young Ashes are growing from seed, taking advantage of the suddenly-open canopy above. Our initial feelings of doom for the species subsides as we consider the amazing capacity of all trees to overcome population decline in the face of disease, insects, glaciers, and, sometimes, even humans. Some of these young trees appear to be two or three years old, and their happy fresh leaves stir hope inside us.

The next day, in Windsor, we meet an employee of the Essex Region Conservation Authority who shares that hopefulness. She tells us that the ERCA has begun planting Ash trees again, because they believe the epidemic to be waning. The beetles are spreading from Michigan north, she tells us. Once the beetles reach an area, almost all the Ash trees die within a few years. But within a few more years, the beetles decline in number and regrowth becomes possible.

Some people in this region have taken up using poison or burning infected trees to prevent the Ash Borer’s spread, likely acting from the same fear and concern that we felt in that field in Comber. But thinking about the infestation as a problem to be solved is to take too narrow a view and to miss learning the lessons of similar attemps in the past. In the case of the Emerald Ash Borer, it has been discovered that populations of woodpeckers and parasitic wasps kill the beetle’s larvae. In Windsor, a few living White Ash trees are still found in the healthy, biodiverse forests where perhaps these predators of the beetle still live. In these richer forests, Ashes can also find strength to fight within a deeper pool of genetic diversity.

But here in Southern Ontario, where ninety-nine percent of the original forest is gone and the wildlands that remain are badly fragmented, this biodiversity and resilience are hard to find. It is essential to remember that the severe impact of these infestations is a symptom of a much more grave illness.

The real threat to our forests remains urban and industrial expansion: the ever-expanding frontier of sprawl around every city and town in this region; the intensive agricultural practices that deplete the soil and poison the water; and the ruthless commodification and destruction of whatever forests remain. This is the real scale of the problem, not an insect infestation that only started ten years ago.

When seeing something you love die, it’s understandable to want to do something, anything, to stop it. But if we direct out time and energy into efforts such as burning infected Ash trees, we risk being short sighted. We can already see that the joyful young Ash saplings of Essex county are dealing with this problem themselves. If we want tos upport them, let’s prevent any further destruction of habitat and actively work to expand the health of the wild.

2 responses to “The Ashes of Essex County: on Emerald Ash Borers in Hamilton’s forests”