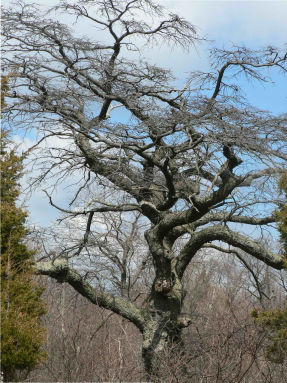 “At this point, no one can say how much of the ecosystem should be in a natural state or what the proportions of the natural communities composing that ecosystem should be. Looking around us we can only say that the few remnants in our region are surely not enough. Even if we could save every remnant (and we can’t even do that) we would not have enough intact ecosystem to preserve regional biodiversity. We will have to create more. Ecological restoration is a means to that end. ”

-Gerald Waldron, in Trees of the Carolinian Forest

Trees of the Carolinian Forest is first and foremost a stunnningly definitive guide to the native tree species of South-Western Ontario. The bulk of the book is dedicated to thorough descriptions of seventy-three trees, offering for each a short natural history; where they can be found; what animals and plants are associated with them; uses for its wood; a precise description; and a brief rundown of how to grow the tree from seed and care for it. For years, we have carried this book in our bags on almost every walk we take, and we’re still frequently finding new little gems of knowledge that answer new wonders we have about tree friends. It is definitely our number one guide book to trees for this region.

Gerry lives down in Amhurstburg, Ontario, deep in the Carolinian zone, and the content of this book is of course deeply shaped by these lands he loves. The trees he chooses to describe are the ones that most clearly define his area, and so Trees of the Carolinian Forest becomes almost a whole new book when you bring it with you on a trip further south, like to Point Pelee for instance. When we are down in those rich, sandy forests, it seems like we are meeting a rare and exciting tree species every few steps… a unique Hackberry-dominated forest dotted with Hop Trees and Redbuds, Honey Locusts and Service Berry on the shore, and Chinquapin Oak savannahs – seemingly endless delights!

In the first third of the book, Gerry provides a series of essays to set the stage for the species fact sheets later on. In “Looking Back”, he starts with a geologic history of the region, then moves into a very short description of Indigenous cultures, and then, as happens all to often in naturalist books, the pace of the story slows right down when white settlers arrive on the scene. The telling becomes more detailed, Indigenous Peoples dissapear completely from the narrative, and we are told of the insane fear and hatred with which the great forests of this land were destroyed. This quote in particular stands out to us: 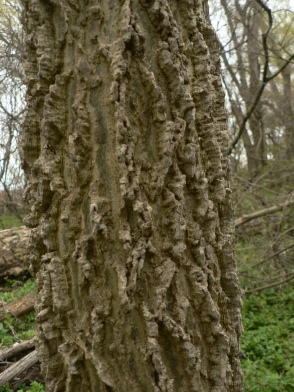 Quirky bark of the Northern Hackberry at Point Pelee

“Settlers from the British Isles came by this attitude honestly, perhaps hereditarily. According to Gerard Boate, author of Ireland’s Natural History (1652), the greatest destruction of Irish woods took place between 1603 and 1641, when English colonizers cutting trees for making charcoal and for tillage (and to deny rebel Irish cover) “made [Ireland] so bare of woods in many parts, that the inhabitants do not only want wood for firing… but even for building.”

We wish Gerry would have gone a bit further with this, and recognized the brutal colonial process behind the destruction of both Irish and Southern Ontario forests and Indigenous cultures. There is no separation between the destruction of the land of the human societies that live there: each is in furtherance of the other, and neither could be carried out alone. Gerald talks about the settlers’ fear and hatred of the forest, but not how that hatred was racist and colonial, a part of Canada’s foundational genocide.

Although the history is interesting, the analysis is basically summed up in this quote, presented as a stand-alone paragraph in a discussion of industry: “To our twenty-first century minds, the clearing of the Carolinian forest is a desecration, a despoliation and simply a waste. But we must remember that it also created the capital that fueled the growth of our nation.” Capital is a substitute for a healthy landbase? Growth is an unquestionned good? And whose nation is it? Certainly not the Indigenous Nations whose stories appear to have simply ended when Canada’s began.

“For our purposes, we will define restoration as the process of re-establishing natural communities by planting and encouraging the native species originaly present in an area. It goes beyond planting to stabilize eroding areas. It goes beyond just landscaping with native plants. It is an attempt to recreate nature by assembling a documented community from its component species. This sets it apart from reforestation, naturalizing, and landscaping for wildlife.”

This is a powerful idea. It has a lot of merit and a growing number of individuals and groups practice it. We would like to offer a few criticisms of it though. The phrase “originally present” is a strange one, considering that Gerry spends the first five pages of “Looking Back” describing the receding glaciers and the order in which plants came to re-inhabit South-Western Ontario. The march of species into this zone and further north is an ongoing process, especially under the realities of climate change. In addition, to base our restoration practice around a snapshot of some arbitrary moment in that process (especially when that moment is defined by the arrival of white settlers) perhaps takes us too far from the stresses and pressures of being a healing forest in a highly populated and developed area. 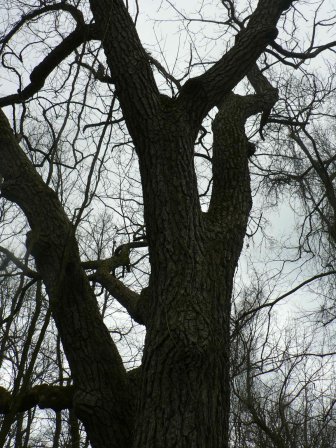 Rather than try and turn back the ecological clock, we favour a more dynamic idea of health, rooted in observation and appreciation of what the land is already doing to heal. I doubt Gerry really disagrees with us on this, but the way restoration is presented in Trees of the Carolinian Forest has lead to more than a few restoration projects around this area involving tearing out everything that is already growing (species deemed to be worthless), stripping the soil bare, then planting species from the approved list of “truly native” species. The current fad seems to be to plant the shores of Lake Ontario to resemble those of Lake Erie, judging by the recent arrival of Tulip Trees, Hackberries, Hop Trees, and Redbuds to the parks of Hamilton.

Gerry is a lover of trees and of wild spaces, and his passion is to help them to thrive and expand. Trees of the Carolinian Forest has made his passion contagious to people throughout this region. It is an invaluable guide to learning forest literacy in this area, and a tantalizing starting point for allying with the health of wild spaces. Anyone in South-Western Ontario who loves trees will get a lot out of this book, and as Gerry says:

“An interest in trees comes as naturally to us as breathing, and I believe it is generally agreed that those with no appreciation of trees understand very little of consequence.”