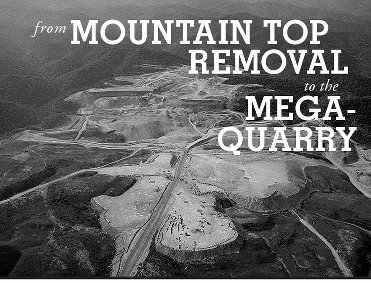 Today marks the Continental Day of Action Against Canadian Mega Resource Extraction. And in connection, last night at Guelph’s The Square print shop and social centre, we attended an event called From Mountain Top Removal to the Mega Quarry. For those of you who don’t know, Mountain Top Removal mining is an immensely destructive form of coal mining practiced in Appalachia, mostly in Virginia, West Virginia, and parts of Kentucky. It involves literally blasting and scraping the tops off of mountains, up to 600ft, to get at the seams of coal underneath. The resulting huge piles of stone are dumped into the valleys between mountains  — more than 1000 miles of Appalachian valley streams have already been filled in. The coal is ‘washed’ on the mountains, leaving huge, toxic ponds of cancerous waste water perched in fragile dams above the communities. Occasionally, these dams burst (and all will fail eventually) with devastating results, but their daily reality is the utter toxification of entire watersheds and human communities from the poisons that seep into the ground water or are dumped into streams. This reality was driven home by screening an excerpt of the film On Coal River, dealing with the opposition to a Massey Energy (now Alpha) tailings pond located directly above an elementary school.

As the presenters repeatedly emphasized, when we talk about Mountain Top Removal we aren’t able to bring much hope and positivity into the discussion. We are considering the permanent destruction of the oldest ecological communities in Eastern Turtle Island. Biologists tell us that during the last round of glaciers, many areas of Appalachia were bypassed by the ice sheets, and they served as seed banks for the entire area now known as the Eastern Decidous forest, including Southern Ontario’s carolinian forest. They are the most biodiverse temperate forest in the world, and are the grandmothers of the forests we love here.  In this sense, we have a deep personal connection to the Appalachian forests and to the struggles of the people there.

The take-home message of the evening though was that understanding the apocalyptic-scale destruction that continues in Appalachia shows how things here in Southern Ontario can get a lot worse, and that we can’t afford to be complacent. Guelph is in the Grand River watershed, one of the most polluted rivers in Canada. It can be hard to see what difference another toxic project will make, since the water is already undrinkable. But we can still grow safe vegetables here, fish can still survive. We are not getting rare cancers in our teens just because we live near the Grand River.

The second part of the event was then a discussion of six major and very toxic projects slated to happen in Southern Ontario in the next little while. There is no one project that will destroy this region on the scale of Mountain Top Removal in Appalachia, but taken together, these six trends present a very serious threat. The six themes highlighted by the presenters were:

It is so important to talk about these things, and to build a vibrant and active resistance to these and any other threats to the health of our landbase. But when we commit to preventing these insane, greed-fueled projects, we can run into some pretty powerful repression. In West Virginia, 20 activists in West Virginia are currently in jail following a successful shut down of an MTR mine earlier this week. Long time activist Justice Steele was targeted with serious violence while in jail, but allies managed to secure their release earlier today. For more information on this action and how to support the 19 others, visit rampscampaign.org.

And remember, when it’s in the ground, coal continues the work it did when it was an ancient fern forest — filtering the water, storing toxins, and nourishing communities downstream. It’s value is greatest in the ground.

2 responses to “Reportback: From Mountain Top Removal to the Mega Quarry”